What’s it about?
Colum McCann writes a novel of beautifully interwoven stories. The first story begins in 1974 with the sighting of a tightrope walker balancing on a wire between the two twin towers. All the stories weave together to show a world that is both harsh and achingly beautiful.

What did it make me think about?
This is truly a well crafted book. The writing is great, but the plots of each individual story were equally engaging.

Should I read it?
Yes! Be warned though- this is a book that may seem disjointed at first. Patience pays off. The book just keeps getting better and better. The last few stories are the reward for your patience.

Quote-
“Corrigan told me once that Christ was quite easy to understand. He went where He was supposed to go. He stayed where He was needed. He took little or nothing along, a pair of sandals, a bit of a shirt, a few odds and ends to stave off the loneliness. He never rejected the world. If He had rejected it, He would have been rejecting mystery. And if He rejected mystery, He would of been rejecting faith.

What Corrigan wanted was a fully believable God, one you could find in the grime of the everyday. The comfort he got from the hard, cold truth- the filth, the war, the poverty, was that life could be capable of small beauties. He wasn’t interested in the glorious tales of the afterlife or the notions of a honey-soaked heaven. To him that was a dressing room for hell. Rather he consoled himself with the fact that, in the real world, when he looked closely into the darkness he might find the presence of a light, damaged and bruised, but a little light all the same. He wanted, quite simply, for the world to be a better place, and he was in the habit of hoping for it. Out of that came some sort of triumph that went beyond theological proof, a cause for optimism against all evidence.” 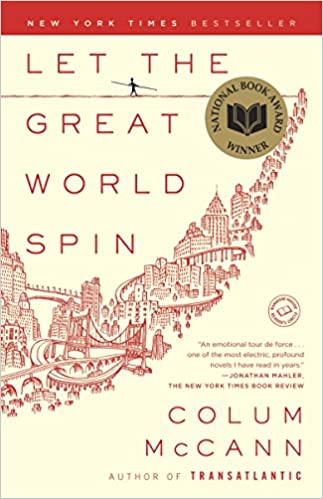